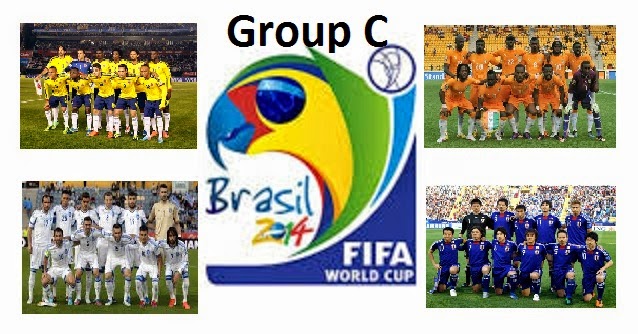 
Each team have their respective and widely differing strengths, and Group C, while perhaps lacking in big-name teams such as Spain, Brazil or Germany, might provide one of the most entertaining matches of the group stages. It is difficult to pin a favourites tag in this group, but perhaps Colombia shades the other four, at least quality-wise.

Colombia’s meteoric rise from the doldrums of mediocrity is certainly no fluke. Never have we seen such a great Colombia team since the time of Valderrama, Asprilla and (yes, it’s the scorpion-kick dude) Higuita.

Today’s Colombia national team might sport much less radical haircuts, but they are just as big a force, if not a bigger force, to be reckoned with. They boast many attacking talents in the form of Falcao, James Rodríguez (both Monaco), Juan Cuadrado (Fiorentina) – so much so that the likes of Jackson Martínez (Porto) and Fredy Guarín (Inter Milan) are struggling to break the first team for the Colombians. Colombia’s Napoli wingback duo of Pablo Armero and Juan Zúñiga are reliable in providing lung-bursting runs down the flank to provide attacking impetus for a team who will thrive in going up the field.

However, the age of the centre-backs is a matter of concern for Colombia. First choice duo Mario Yepes (Atalanta) and Luis Perea (Cruz Azul) will be 39 and 35 going into next year’s tournament. While their tackling and marking work is credible, they are usually found susceptible pace-wise. Expect Japan, in particular, to exploit this weakness.

Economic worries aside, Greece has shown marked progress over the years. Many people consider their Euro 2004 triumph to be a fluke, yet Greece now prove to be a consistent and respectable team. While their current squad is not as good as the class of ‘04, it has to be said that the current Greece squad still retain the defence-first mentality that won them the Euro in Portugal. Indeed, Greece only conceded 4 goals throughout qualifying – only Spain managed to ship less goals, and that was with playing 2 games less.

To put that feat in perspective, Greece was in the same group as trigger-happy Bosnia and Herzegovina, who managed 30 goals throughout qualification. Only 3 of those came in their two fixtures against Greece. As such, expect Greece for a couple of shutouts this tournament, even perhaps against Colombia. However, Greece qualified for the World Cup largely through 1-0 and 2-0 victories against lesser teams.

As such, it is vital that Greece boss Fernando Santos find a prolific striker for the team as well as a midfield unit which can provide for the striker so that they can find the net a few more times. Luckily, Greece have unearthed the potential of Kostas Mitroglou (Olympiakos), who scored 3 times in a 4-2 aggregate victory over Romania en route to the tournament proper. In addition, the 3 goals scored in the first leg were all products of incisive one-touch passing and skilful finishing which brings a new dimension to this current Greek squad.

Côte d’Ivoire is largely reckoned as one of the best, if not the best, African sides to ever grace the world stage. It comes as a surprise, therefore, that Côte d’Ivoire has failed to progress beyond the group stages in their two last travels in the World Cup. One might rue the luck of the draw for putting Drogba and Co. in two successive Groups of Deaths.

However, you get a feeling that this toss-up group might prove to be Côte d’Ivoire’s lottery ticket. It might even prove to be the last such ticket for an ageing golden generation. Led by the excellent Didier Drogba (Galatasaray, 35) and the Touré brothers Kolo (Liverpool, 34) and Yaya (Manchester City, 30), it is evident that for many of these Ivorian players, this might be their last chance to get things right. Côte d’Ivoire have plenty of depth up front, with the likes of Wilfried Bony (Swansea), Gervinho (Roma), Seydou Doumbia (CSKA) and so on.

However, the defence is where the Ivorians might be stretched for cover. Kolo Touré aside, the Ivorians do not have a great defender, and although the Trabzonspor duo of Sol Bamba and Didier Zokora are seasoned veterans, they might be caught wanting pace-wise, especially with Colombia and Japan in this section.

To round-up this intriguing group, do not write Japan off based on their relatively unflattering world ranking. Japan are full to bursting with attacking talents who possess speed, vision and great technical ability.

Led by soon-to-be-Milan player Keisuke Honda, Japan’s attack boasts the likes of Shinji Kagawa (Manchester United), Shinji Okazaki (Mainz), Hiroshi Kiyotake (Nürnberg) and so on. At the back, Japan seems to be shored up as well, with the likes of Yuto Nagatomo (Inter) and Atsuto Uchida (Schalke) holding quality and experience to boot. Indeed, Japan’s recent run of form has been promising, with a 2-2 draw against the Netherlands and a surprise 3-2 win over much-fancied Belgium.

However, Japan lacks consistency to be a real dark horse for the World Cup. The results against the Netherlands and Belgium were preceded by surprise defeats to Serbia and Belarus. In the Confederations Cup, too, Japan lost all three games, putting up a shabby display against both Brazil and Mexico en-route to bowing out of the tournament, shipping as many as 9 goals in the process.