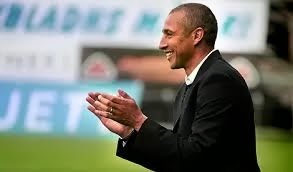 Rumor has flourished and now it is clear that Henrik Larsson, 42, will take over as coach Falkenberg. He replaces his former assistant in Landskrona, Hans Eklund.


"It's great that we can now present Henrik Larsson as the new coach. We have met several times and carefully talked through the conditions we have in the FFF", said sporting director Håkan Nilsson to the club's website.

Larsson appeared in Landskrona between 2009 and 2012, and this will be his second job as head coach after a long and successful career both at club and national level as a player.


"This will be really fun and inspiring. I enjoy challenges and look forward to the success of something that everyone outside Falkenberg seem to think is impossible. I've got a good idea of the club, having reconciled with different people with good insight into the club and carefully listened to myself and what I want so this was not a difficult decision", says Henrik Larsson to the club's website.

"I have seen Falkenberg live once a year and even followed some matches on TV. I like the aggressive and direct style of play and it is not for nothing FFF scored more than 60 goals in the series. The club's focus on young players is also very interesting and something that I really like. It will be fun to train Falkenberg FF and it is with the team and the club in general, we should do it", he concludes.