Roma coach: All my players deserve the Ballon d'Or

Roma coach: All my players deserve the Ballon d'Or 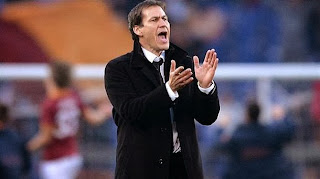 Garcia was in Zurich last night attended a ceremony awarding prizes for the best players from 2013. year. The award is, we recall, won Cristiano Ronaldo.

"I am pleased to be here and talk with so many great people from the world of football. I would gave each player of Roma Ballon d'Or because they have a great season," said Garcia.

Roma in 19 games this season suffered only one defeat and that from Juventus.


"Scudetto race is not over. We have to win as many points as possible, and then we'll see what Juventus can do," added the former coach of Lille.

at 3:08 AM
Email ThisBlogThis!Share to TwitterShare to FacebookShare to Pinterest
Labels: AS Roma, Roma coach, Rudi Garcia, Serie A