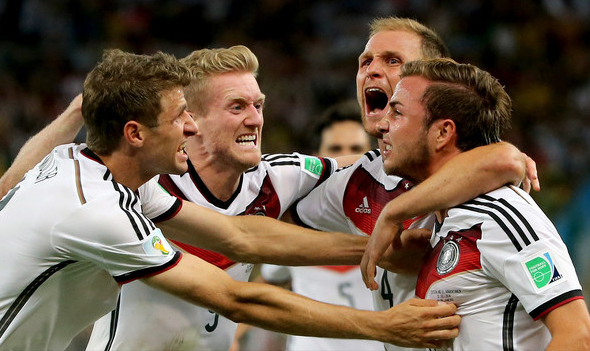 In the final of the 20th Mundial which is played at the Maracana stadium Germany beat Argentina 1-0 after extra time goal in the 113th minute by Gotze. In this way they reached the fourth title of world champion in history

Match are both teams started with  open guard. First threaten the Germans over Kroos who in 3rd minute bad for a free kick. Just a minute later, Higuain found himself in a good opportunity, but sideways from the right side shoots wide.

Higuain did not used a mistake of Kroos.

After that Elf controlled the game, while the Gauchos extremely dangerous from counter-attack. Played the ninth minute when Messi threatened Neuer. Howeverwas not concentrated in the finals.

In the 21st minute Kroos made big mistake. His head pushed into a chance Higuain who found himself "face to face" with Neuer. However, badly kicked.

Chosen ones Joachim Low's fight back in the 28th minute. But it was offside. Just two minutes later Huguain managed to score, but was canceled due to offside.

After 30 minutes, the German coach instead of the injured Kramer in the game entered Schurrle.

Great action Gauchos running in 36 minutes. Lavezzi makes its way through the middle and handing the ball to Messi. However, a player of Barcelona is blocked at the crucial moment.

Just 60 seconds later Germans fight back over Schürrle, but the result does not change. Kroos is 43 minutes from a good position hit Romero, and the best chance of the first half for Elf missed Howedes who, after a corner kick hit the post.

The first 45 minutes ended with the score 0-0. However, the fans had what to see.

Below chosen ones Alejandro Sabella moving strongly. Messi in the 47th minute from a great situation shoots wide.

It was 57th minutes when goalkeeper of Germany ahead of Higuain got the ball, but he hit an Argentine. Main referee Rizzoli showed a offense for Elf. Then usually played between two area.

In the second half both selection led more accounts about their goal. The stakes were enormous. Kroos in 82nd minutes after reversal Ozil, bad kicked.

The second part was much calmer and the regular 90 minutes ended without goals. The game goes into overtime.

Just as it started the first part of a continuing Schurrle shoots, Romero defended. On the other side tried Aguero. It was not accurate. In the 97th minute Palacio is from phenomenal position wanted to lobbing Neuer, but failed. The first extension didn't brought changing results.

At 113 minutes, the Germans took the lead. Schurrle fantastic assists Gotze, which from difficult position hits for 1:0.

The result up to end of the match did not change. Germany is quite deservedly won the title of world champion. Now they have four titles as well as Italy.