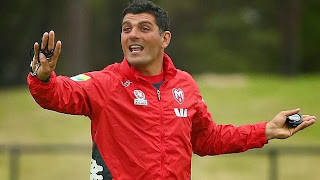 Melbourne Heart Board and John Aloisi were divided in opinion, and the helm of the team takes over team coaches


"John has been an absolute professional at our Club, as an inaugural player, as a coach of our National Youth League side and as Head Coach of our Hyundai A-League team," Chairman Peter Sidwell said.

"We have the greatest respect for the commitment he made ​​to Melbourne Heart FC and the dignified manner in which he has carried himself through a difficult period.


"We wish John and his family the best for the future and thank him for his valuable contribution to our club."

After 12 rounds of the Australian A-League, Melbourne Heart FC takes the last place without a single victory and four draw and eight defeats. It's hard to believe that by the end of the season able to create any result worth mentioning, but the change in the club was necessary.

Team training will continue as scheduled this week and be taken by existing coaches within the football department until the appointment of an Interim Head Coach.
at 1:08 AM
Email ThisBlogThis!Share to TwitterShare to FacebookShare to Pinterest
Labels: A-League, Australia, Australian A-League, Australian football league, enko football, football news, Hyundai A-League, John Aloisi, Melbourne Heart