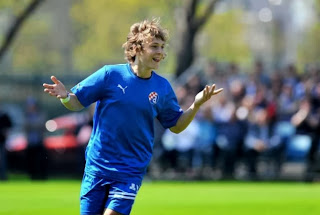 Portuguese A Bola writes that Benfica wants to join the race for Alen Halilovic, and that is getting ready send an offer to Dinamo


"Benfica can join into a story about Halilovic, the Lisbon club is able to provide 10 million euros, operates through funds, there is always money for such a quality young players. Benfica's play would correspond to Halilovic. Believe that in a race about Alen include and Porto.

And speaking of what international media reports, it must be noted that some German and English argue that Alen's dad Sejad resided in Dortmund, and that he met with coach Jürgen Klopp and sporting director Michael Zorc. Apparently agreed in principle close, and to these allegations Halilovic in January should relocate to Borussia Dortmund.


However, the story does not end there, noting the interest of Arsenal, and also the fact that by bringing Dinamo "wunderkind" did not give up even Tottenham, who last summer blue team wanted to pay 13.5 million euros, but the deal fell through because of some additional requirements dads Sejad.

To Dinamo Zagreb would for Alen Halilovic be wise to sell before the age of 18, as it would with adulthood could go without adequate reparations, which is not the purpose of the blue team, but even family Halilovic.


"We have contacts with Borussia when it comes to Halilovic! Equally contact with Real Madrid and Barcelona, who are also interested in him. As with some other clubs. However, for Halilovic in club did not came any concrete offer. It is all about queries. No, I do not know if Alen's father was in Dortmund. Transition begins in January and then we will see. clubs are not interested only in Halilovic, but for some of our other players. However, while there is no concrete offer, there is just speculation "said the president of Dinamo Mirko Barisic for the local media.