Fenerbahce unstoppable onslaught to the title

Fenerbahce unstoppable onslaught to the title 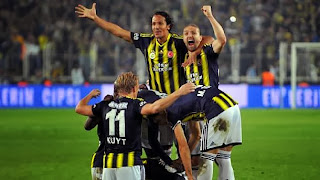 Fenerbahce is as a guests at Rizespor managed to reverse the result and came to 11th championship victory, and thus further strengthen in the first place with 35 points, while second-placed Kasimpasa has eight points less.


Cameroonian striker Kweuke, a former player of Sparta Prague, in the 11th minute leads Rizespor into the lead, but Baroni in the final of the first part scores for 1:1. Webo is at the 83rd minutes, scored the winning goal for the visitors.

The aforementioned composition Kasimpasa played a 1-1 as a guests with . Vederson was the scorer for the domestic and Malchi for guests. There were three red cards in the game. Promise at 87th minute excluded in the ranks Antalyaspor, and in the composition of the guests Eker and Babel in the 75th minutes, had to leave the game.