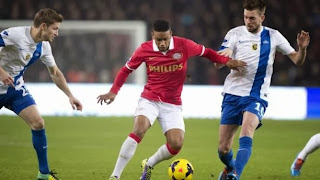 European champion from 1988th year team PSV plays disastrous this season. Namely team PSV after sixteen rounds in Erdevise is only on the 10th place with only 20 points

Also they desperate plays in Europe League this season, where the only victory achieved in Eidhovenu against Dinamo Zagreb.

In tonight's game on home ground received six goals from Vitesse, and so signed up one of the worst defeats in the history of the club. The final score was 2:6 in favor of the guests, and even three goals recived in the last five minutes.

at 2:12 AM
Email ThisBlogThis!Share to TwitterShare to FacebookShare to Pinterest
Labels: Eredivisie, Netherland, PSV, Vitesse