Eduardo wants to return to the Premier League

Eduardo wants to return to the Premier League 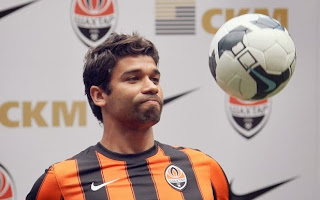 Croatian national team player contract with the Ukrainian team expires at the end of the season.

Eduardo spent three years in the Premier League playing for Arsenal and admitted that the good performances for Croatia at the upcoming Mundial able to "earn" a return to England.


"I still love Premier League. Maintains contact with Tomas Rosicky and Bakari Sagna in Arsenal and I follow what is happening in the Premier League. Expect to play for Croatia in Brazil and if I do it good, who knows what it could to bring," said Eduardo for the Daily Star.

The Brazilian said he was impressed with what the team Arsène Wenger done this season.

"Arsenal have the right mentality and that I'm not surprised that they are so good start the season and that are in the top of the Premier League. Remember, their good games are actually began in the second half of last season when they won a lot of points and qualify for the Champions League," said Eduardo.

He added that he believes that Manchester United, who is now ninth in the standings, will be all the stronger as the season moves awayand that will team from Old Traford fight with Arsenal for the title.


"I like how Liverpool plays this season... I think that will fight for the title lead these three teams - Arsenal, United and Liverpool," said Eduardo.