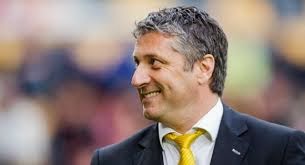 The club announced the dismissal of Brood via a statement on their website on Monday, "The management of Roda JC Kerkrade has today decided to terminate the contract with head coach Ruud Brood immediately,"

Roda JC slipped to 14th place on Saturday and only one point above the drop zone, after letting a 2-0 lead slip against bottom side NEC, finally losing 4-3.

Saturday's defeat, Which left Roda JC without a win in six league matches, proved to be the final straw for the clubs directors, and they will now look for Brood's replacement.


Brood Rod took over in 2012, after spells in charge of Heracles, and RKC, but could only guide the Kerkrade side to a 16th place in the league last season, Which meant they had to survive through the relegation play-offs.