Countdown: Introducing Group B at the World Cup

Countdown: Introducing Group B at the World Cup 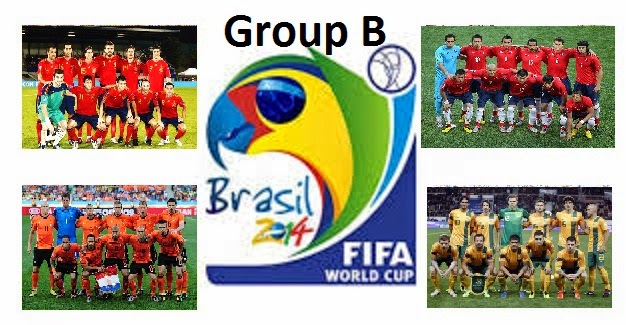 After presenting the Group A, came turn to present the Group B where it is currently the best team in the world and the current world champ

Otherwise, the biggest success of the Spanish national team at the World Championships before the famous 2010. was the fourth place back in 1950.

Chosen ones Vicente del Bosque won their appearance in the championship by they are in the qualifications as expected ended up on first place in Group I. Qualifying ended the unbeaten with three goals received, but they failed to overcome France and Finland at home.

Second favorite in this group should be a representation of the Netherlands. Three times they played the finals of the World Championships, 1974th, 1978th ​​and 2010th, and even two of the three finals they defeated after extra time. Four years ago, in South Africa, remained without a trophy with goal by Andres Iniesta in the 116th minute.
This will be the last championship for the selectors Louis van Gaal. Trainers autocrat has recently become the new manager of Manchester United, and for upcoming Mundial chance decided to give great hopes of Dutch football. Even 16 football players from his preliminary list of play in Eredivizie.

The big problem will be a lack of Kevin Strootman. The heart and soul of this team will miss Mundial due to serious injury in March and will therefore be off the field until December.

Lale they stormed through qualifying for this tournament. In Group D with 28 points took first place ahead of Romania, the only Estonia managed to "rip off" point. The Netherlands was the first European team, along with Italy, which has won a performance in Brazil.

Chile one of the football team, which experts consider a possible surprise at this year's World Championships. The rise of the Red start with arrival of Marcelo Bielsa 2007th year. El Loco them 2010. led on the first Mundial after 12 years. They pushed to the eighth finals before being stopped by Brazil. Small crisis has caused the appointment of Claudio Borghi, but the rise again continued with arrival of Jorge Sampaolio. Chileans have returned energetic play with high pressure from what kind was presented under the guidance of Bielsa, and on whose philosophy is based the idea of ​​football Sampaolio.

The biggest success of the national team dates back to the 1962nd year when in the country won third place. Mundial in Brazil fight with direct placement winning third place in the South American qualifiers.

For someone outsider in Group B is Australia. Socceroos have qualified for the championship with second place in Group B of Asian qualifying, and so came to the third consecutive, and fourth in total participation at the festival of the best football teams of the world.

2006th in Germany have made ​​it to the round of sixteen, which them until today, and the most successful in the history of the championship. Then the in the group F, finished second behind Brazil and ahead of Croatian and Japan. In the knockout rounds were kicked by the eventual winner Italy 1-0 with those goal Francesco Totti from the penalty spot in the 90th minute.

Here's the preliminary list of 30 players for their selectors Ange Postecogloua:

Postecoglou opted for a group of very young players and so gave them a chance to make a good impression in Brazil. A total of ten players aged 22 or younger, with an average age of only about 25th Nevertheless, has plenty of places for experience, so in team invited Tim Cahill, to which this will be the third championship, Mark Bresciano, Josh Kennedy and Mile Jedinak, captain of the Crystal Palace, which is perhaps the biggest star of this team. In Brazil will be the captain because of the absence Lucas Neill.

Spain is a big favorite, not only in this group, but also on the festival. Netherlands to on the paper should go in the further course of the competition, but should not be too surprised if instead of van Gaal in the knockout rounds finds Chile or Australia.