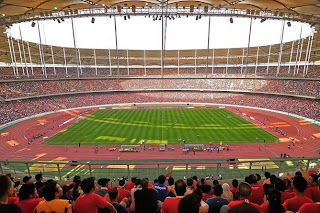 Most will agree that football is the most important things in the world, many football clubs around the Earth, depending on the country from which they coming, have a large number of their fans

For this reason, some have been forced to make huge stadiums in order at the their home matches attended as many football fans as well and therefore in order the atmosphere at the matches was as beautiful as possible.


Below are the 10 largest football stadiums in the world. Four are located in Asia and two in Africa, America and Europe.

With a capacity of 86,000 spectators is located in Alexandria Borg El Arab Stadium is the second largest in Africa. It was built because Egypt had the intention to host the World Cup 2010th year. UEFA delegates this stadium characterize as one of the best in the world.

Bukit Jalil National Stadium has hosted the national football team of Malaysia and his capacity 87,411. seats. Often used for the promotion of European clubs coming on the Asian tour. 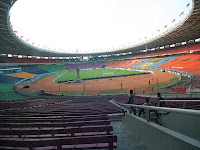 Located in the capital Jakarta, Gelora Bung Karno Stadium has a capacity of 88,306, spectators. It was built in 1960.and renovated 2007th when his capacity from 100,800 seats reduced to today. It is also used for concerts, a legendary band Deep Purple at this stadium in 1975. held a concert in front of 150,000 people.

England's iconic National Stadium Wembley can receive 90,000 spectators and is one of the most modern in the world, opened in 2007th on the site of the old eponymous stadium. Its construction cost is nearly 800 million euros, and besides matches "three lions" host is the FA Cup final matches and other less significant competitions.

It was built back in the 1922nd year Rose Bowl Stadium in Pasadena is located in the U.S. state of California, can receive a total of 93,420 spectators, and in 1994. on this stadium the finals of Mundiala played Brazil and Italy.

With a capacity of 94,736 spectators Soccer City stadium opened in 1986 , and renovated and expanded 2009th year. The stadium hosted the last World Cup finals between Netherlands and Spain.

Located in the Iranian capital city of Tehran with a capacity of 95,225 spectators. Azadi Stadium was built in 1974. year and shared by the two most popular football clubs in Iran.

With a capacity of 99,354 spectators Camp Nou is the third largest stadium in the world, opened in 1957. , and last time renovated 2008th year. The home is Barcelona and is the largest in Europe.

Azteca Stadium is located in the capital of Mexico, Mexico City. The iconic stadium where are played two finals of Mundiala can receive 105,064 spectators and is the largest on the American continent. Host's Club America, was built 1968th year for the summer Olympic Games.

This stadium is located in Calcutta is the largest in the world with a capacity of 120,000 spectators. Opened 1984. year, and on it play four local clubs and the national team of India.