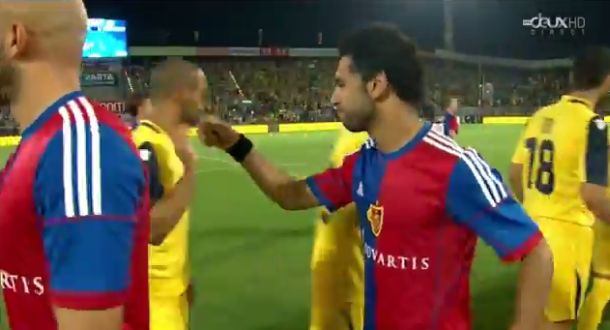 After last week, Mohamed Salah in the first leg of the Champions League avoid to shaking hands with Maccabi players, something similar he did last night


Mohamed Salah refused to lend a hand Maccabi players and decided to greet with players of the Israeli team in their own way. Salah is before the game and gave an interesting statement.

"In my mind I will play in Palestine, not in Israel. I'll do anything to achieve goal and my team goes on. Zionist flag will not be in the Champions League," said Salah.

Salah scored the second goal in the draw Basel with Maccabi 3-3, but the Swiss passed further beause of goal away.
at 9:06 AM
Email ThisBlogThis!Share to TwitterShare to FacebookShare to Pinterest
Labels: Interesting