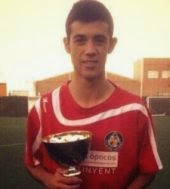 Martinez was during the match Junior Championship of Spain between Ontinyet and Castellon collapsed after 20 minutes of play.

He collapsed on the lawn, and the game was immediately stopped. Unsuccessful attempts were paramedics to save the young man, and after an autopsy will be known the real reasons for his death.

In 2014th year was another death in Spain. In early February, collapsed 26-year-old Ortiz Gurrutxag.