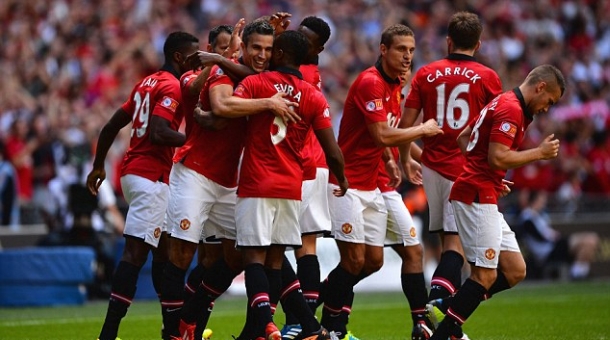 The 2013 FA Community Shield was played at Wembley Stadium, between the winners of the previous season's Premier League - Manchester United and FA Cup - Wigan Athletic


Van Persie, with 2 goals, offered the first title to the new commander of the Red Devils, David Moyes.
Although relegated from the Premier League last year, Wigan showed that they are not fazed by the big occasion when they defeated United's neighbors City in the FA Cup final.

After just six minutes, Robin van Persie guides a header into the bottom corner from Patrice Evra's delivery.
And he wrapped up the win just before the hour mark, though his shot was deflected by James Perch on its way in to the net.

However, below, Robin van Persie score another goal, and confirms that this season will be the driving force of champions England. A goal arrived after 59 minute after a bad reaction Wigan defense.

After that goal was followed by a drop of rhythm games, and the ball was mostly stayed in the middle. Wigan is trying to reduce the result, but it's all mostly ended on half-opportunities.
at 11:34 AM
Email ThisBlogThis!Share to TwitterShare to FacebookShare to Pinterest
Labels: Premiere League