Argentina after penalty shootouts in the final of the World Cup

Argentina after penalty shootouts in the final of the World Cup 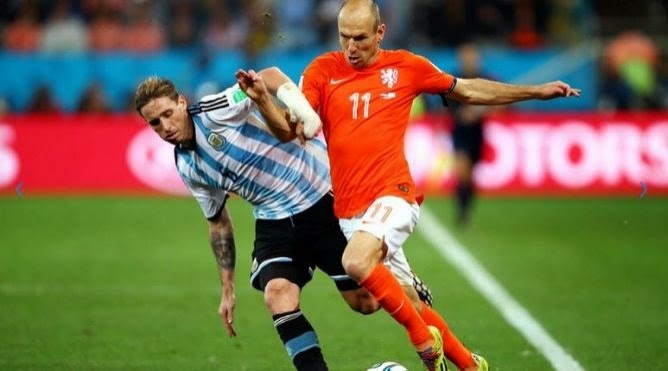 In the final of the World Cup in Brazil will play Argentina which in the semifinals was more successful than the Netherlands, thanks to penalty shootouts

The match was a tight and tense affair from the start, with both side's looking to keep it compact at the back and not allow any space for the likes of Arjen Robben or Lionel Messi.

The only shot on target in the first half came from Argentina, but Messi's free kick from just outside the box was straight at Jasper Cillessen. At the other end Netherlands struggled to find any attacking rhythm as Sneijder was not allowed any time on the ball, while Arjen Robben and Robin van Persie were left isolated up front.

The second half was much of the same with Argentina having most of the possession, but finding no way past the excellent defensive duo of Ron Vlaar and Stefan de Vrij. In the final minute of normal time Netherlands created their first real opportunity when Arjen Robben was played in on goal, but Javier Mascherano made ​​a brilliant last-ditch tackle to stop the forward winning the game.

In extra time it was clear that both teams were tiring, and chances to win the game were few and far between, but Argentina forward Rodrigo Palacio should have sealed the win for his side when played in on goal, but his weak header was saved.

The match wen't to penalties, but this time there was no Tim Krul for Netherlands, while with Robin van Persie going off in extra time, the captain was no longer there to take the Dutch's first spot kick. Astoundingly the task of the first penalty was handed to center back Ron Vlaar, who had been Netherlands old man throughout the match, shackling Messi from the start to the finish. However Louis van Gaal's latest tactical trick did not work as Vlaar's weak spot kick was easily kept out by Sergio Romero.

This instantly piled the pressure on goalkeeper Jasper Cillessen, who had never saved a penalty in his career, and that stat did not change as he failed to keep out all four of Argentina's, while Wesley Sneijder was also guilty of missing for the Dutch.