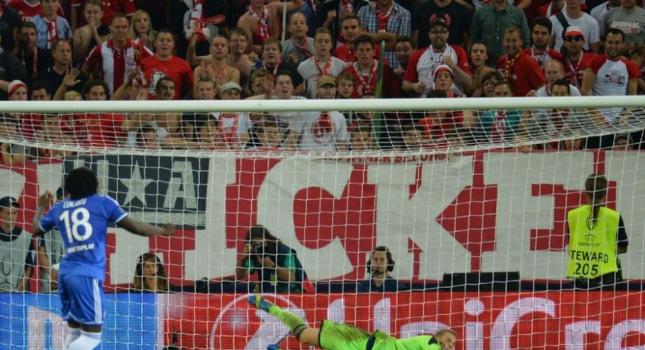 Bayern win the UEFA Super Cup for the first time in four Attempts and in doing so, become the first German side to win the competition


What a dramatic end to the Super Cup game. For the second consecutive meeting between these two teams there was nothing to choose between them. Tell Martínez's cool finish means for the first time ever, the UEFA Super Cup was Decided by a penalty miss by Lukaku. (5-4)

Bayern had the majority of the ball in the first period, but a strike from Fernando Torres after eight minutes ensured that the Premier League outfit entered the break ahead.

Bayern were level in the early stages of the second half courtesy of a strike from Franck Ribery, but that was how it ended as the match entered extra time.

Chelsea struck first through Eden Hazard Ramires despite being sent off, but Tell Martinez equalized in the final minute to send the match to a penalty shootout.

Xherdan Shaqiri's penalty sent Bayern into a 5-4 lead, before Romelu Lukaku's miss meant that the German outfit secured the trophy.

at 3:56 AM
Email ThisBlogThis!Share to TwitterShare to FacebookShare to Pinterest
Labels: Champions League, European league