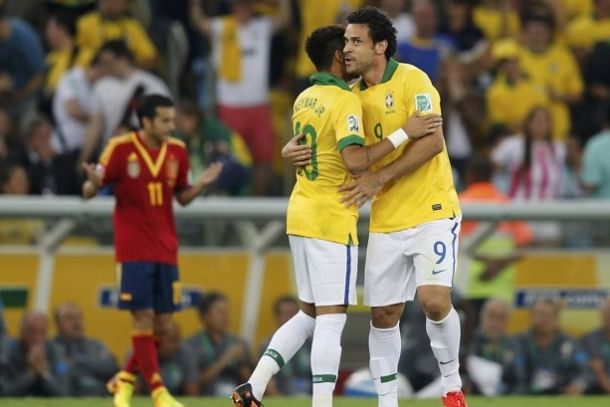 
Brazil had a great opening match, and already from the first serious attack came in the lead. After a cross from the right side, found himself in a duel from the Spanish defense, but lost the duel and ended up on the ground. But, he feels great on the ground, and from the lying position checkmated Casillas the lead to 1-0.

Karioka dominance continued into the following meeting. In the 11th minutes Fred left the ball for Oscar, and midfielder Chelsea shoots wide. Paulinho then tried from half court to overcome Casillas, but Ilker was cautious, and he saved his goal.

Iniesta had in the 22nd minute the first opportunity for Spain, but Julio Cesar lightly defended. Brazil has dominated during the first half, the Spaniards came a little breath before the end of the half when they missed a hundred percent chance. Mata has hired Pedro, who overcame Cesar, but from goal line the ball knocked David Luiz.

Punishment for this failure came just a minute later. Oscar has found Neymar, who with fantastic goal sideways to the left score for convincing 2-0 at the break.

At the opening of the second half Brazil increased its lead. Hulk has hired Fred, who shoots from the first, and kicked Casillas for big 3-0.

In 55th minutes were awarded a penalty for Spain. Responsibility is assumed by Sergio Ramos, but firing wide. Hulk then had an opportunity for Brazil, but this time Casillas with run away save his goal.

Spaniards in the 68th minutes left and with one less player, after Gerard Pique was given a red card for a foul Neymar. Neymar has been tried and perform foul, but a shot over the bar. Pedro had a good opportunity in the 81st minute, but was this time Cesar has defended.

Villa is before the end the meeting had a good attempt, but Cesar is another great defending left his net untouched, and it stayed 3-0.
at 11:50 PM
Email ThisBlogThis!Share to TwitterShare to FacebookShare to Pinterest
Labels: Confederation Cup