Premier league: Who will in the Champions League: Arsenal, Chelsea, Tottenham or Everton?

Points difference between Arsenal (59) on the third and Everton (55) at the sixth position is four.

Tonight from 20:45 pm to meet exactly Arsenal and Everton at the Emirates Stadium.
Match will be played backward 33rd round. The match is important, but far from that tonight will be decided which of the two teams continue, and who dropped out of the race to qualify for the Champions League. Between Arsenal and Everton at the table were "pushed" Chelsea and Tottenham, both teams with on 58 points, with that to Blues currently have one game less than their rivals.

As it shape has, Arsenal is currently the best. In the last four games they won four times. In the last four games Arsene Wenger's team has scored 11 goals and received only three. Team morale was further raised after maestral last five minutes of the game against Norwich. Until 85 minutes were losing 0-1, but until the end of the match, "loaded the" three pieces and celebrating a major victory. Needs to have in mind that Arsenal, after tonight's game has a relatively lightest schedule of the remaining three teams. Because, he still remains five games against teams that likely will not have a resulting imperative in duels with the Gunners. From the four mentioned in the worst shape is Tottenham. Of the last four games of the team Andre Villas Boas is only one received. 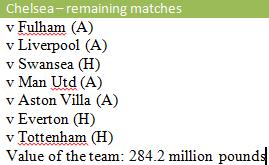 When added to the knock-out by the Basel quarterfinals League Europe, and injuries of the first plumes Gareth Bale, it is clear in what is currently the state of team from White Hart Lane.

Although they are in fantastic shape, Everton is the most thankless situation when the fight for the Champions league in question.

For them it is a duel tonight at the Emirates Stadium is much more important than for Arsenal. Because those with eventual defeat coming in a very difficult situation, they have three points and two games more than Chelsea who is in the fourth position.

As for Chelsea, with them this season do not really know. Can get everyone, they might also loose from anyone. Shocking are also last fall dropped from the Champions League, out of titles in the England long ago said goodbye, and the trophy in the FA Cup last weekend.

They remained a hope of a trophy, one of the Champions of Europe where, for the passage to the finals to play games matches against Basel.

However, qualified for the Champions League is certainly a priority. But it will not be easy to accomplish. They have probably the toughest schedule by the end of the remaining candidates. Among others, from seven games as they remained until the end of the season, two against Everton and Tottenham. From the aforementioned four teams standing for the placement of the Champions league, Chelsea has the most valuable team. Blues are estimated at 284.2 million pounds.
at 6:16 AM
Email ThisBlogThis!Share to TwitterShare to FacebookShare to Pinterest
Labels: Premiere League