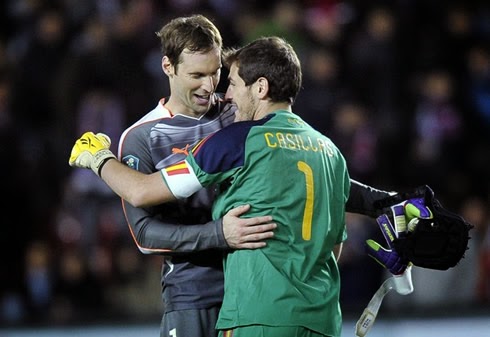 Legend of Real Madrid and the Spanish football is nothing clearer in relation to the recent season, information from Spain claim that Iker close to departure from Madrid! On the other hand agent of Petr Chech argues that there is a possibility that the keeper of Blues moves to Spain

Iker Casillas has had a turbulent season at the club, the season that culminated unexpectedly early elimination from the World Cup, in which is itself Iker was one of those who did not show their best.

Hence the doubt in his club status, opinion that is definitely lost on quality, confidence that it was adorned him last years, and speculation he will leave the club.

Mundo Deportivo today leads with the descriptions of Iker, arguing that the Spanish goalkeeper has been seen as a former goalkeeper of Real Madrid, and since first Arsenal goalkeeper.

The aforementioned source claims that Arsene Wenger and definitely intensified interest for Iker, and that it was personally invited by phone and tried to persuade him to move to London.

Barcelona and Real Madrid will look to sign Petr Cech should he be made available for sale this summer, according to the Chelsea goalkeeper's agent.

Thibaut Courtois is set to end his three-year loan spell at Atletico Madrid and return to Chelsea for the 2014/15 campaign, with the Belgium international expected to become Jose Mourinho's first choice goalkeeper.

Belgium coach Marc Wilmots recently claimed the 22-year-old's return to Stamford Bridge could lead to Cech being sold this summer.

And agent Viktor Kolar has revealed that Paris Saint-Germain are showing interest in his client, along with Monaco, but he believes they would have to compete with the Spanish giants should Chelsea look to offload him.

He has two years left on his Chelsea contract and has an interest to continue there. Mourinho did not tell him that he would not count on him anymore, Kolar told Aktualne.

"We have not been given any signals that Petr would be made available [for transfer]. If that was the case, though, you have to realize that Petr is one of the world's top goalkeepers and has a certain salary. There are not many clubs who could afford to sign him.

"If he were to leave, we're discussing two or three clubs in the world. The situation has developed in a way, of course, but for now he is staying at Chelsea."
at 6:15 AM
Email ThisBlogThis!Share to TwitterShare to FacebookShare to Pinterest
Labels: Chelsea, Football rumors, goalkeeper, Iker Casillas, Petr Cech, Premiere, Real Madrid