Germany and Argentina play their third World Cup finals: Who will be on the roof of the planet?

Germany and Argentina play their third World Cup finals: Who will be on the roof of the planet? 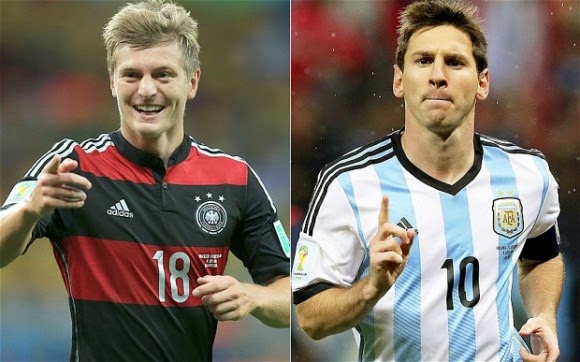 Germany and Argentina will play tonight at Maracanã finals  20th World Cup in Brazil. This will be the third historic finals where they will meet these two teams


For the Gauchos this will be the fifth final in 16 appearances, while the Elf in their 18th appearance at the window of a planetary football play eighth World Cup finals.

The first match for the title of the world these two selections have played the 1986th year in Mexico, and celebrated Gauchos 3-2. Four years later in Italy avenge the Germans. They won 1-0 on a penalty kick goal Brehm in 85.minuti.

Germanywill in Brazil the strive to reach the fourth world titles, and the elect Alejandro Sabella led by genius Messsi try to get to the third championship titles.

"National team of Argentina is not Lionel Messi . Thinking in this way would be very wrong. There are Gonzalo Higuain, Angel Di Maria, Sergio Aguero. These are all excellent players who can solve the game. I know that we can become the first European team to win the title of world champion in South America. That only further raises motivation. We have available mature team. We showed what we can and how we have progressed over the past few seasons. " said at a press conference of Germany coach Joachim Low who believes that football fans expected delicacy.

Many relevant football experts give a slight advantage _ to Germany which was eliminated Argentina in the last two Mundial. So the 2006th in Germany, domestic to celebrate 4-2 after a penalty shoots, while in South Africa was 4-0 for the Germans.

Although the coach Sabella led Argentina to the finals after 24 years of fasting announced that he was leaving from selector bench after Mundial. Gauchos believe that tonight at the Maracana stadium can defeat the Germans and optimism to watch the finals.

"If on Sunday Messi picked up the cup, I'll furnish the red carpet in front of him. He will be a player that will decide the match. Only I am afraid that he is not tired, but in the end can not be tired. I think he will understand." said Maradona .

Italian Nicola Rizzoli will judge the great World Cup final, which begins tonight at 21:00. For Rizzoli this will be the third major final in which the judge, after the finals of the European leagues 2010th (Atletico Madrid-Fulham) and the Champions League final 2013th (Borussia Dortmund-Bayern).