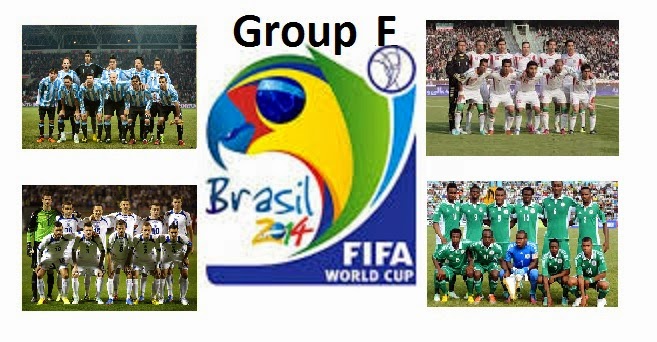 In this group there is one favorite to win the championship (Argentina) and the team that first time participating in the world championship (Bosnia and Herzegovina), next to Nigeria and Iran


This group seems a breeze compared to the others, with no real battle for the final 16 places.

Argentina is comfortably the best team in this group, with the exciting talents of Ángel di María, Sergio Agüero, Lionel Messi and Gonzalo Higuaín, which could all stroll into any other first team in the world. Agüero and Higuaín create a potent and talented strikeforce which will create and score goals, while Messi is definitely one of the best players in the world at the moment even if he is not hitting the peak form of past years.

Di María is one of the best crossers in the game as well. Yet, there are a few worries about the defence; first choice left-back Rojo is untested at this level, and the centre-backs are no where near the top of the world. Zabaleta has been one of the most consistent performers at right-back, however, and as a whole, Argentina should win this group with ease.

Bosnia and Herzegovina is the only debutant at the 2014 World Cup, but also look set to qualify; boasting talents such as the brilliant playmaker Miralem Pjanić and the superb target man Edin Džeko, you cannot look beyond this team which scored a whopping 30 goals in qualifying, with Džeko and Vedad Ibišević sharing 18 goals between them.

Asmir Begović is also touted as one of the best goalkeepers in the Premier League (and the last good thing to be associated with Portsmouth, poor souls). An excellent, albeit risky, team, Bosnia and Herzegovina should get out of the group.

Iran has done well to qualify for their fourth World Cup, but also boast the embarrassing record of one win in nine attempts at the World Cup. A predominantly domestic squad, little is known about them apart from captain Javad Nekounam, who played for Osasuna in the La Liga for most of his career.

Another one to look out for is Reza Ghoochannejhad, who has scored six goals in as many games in 2013. It looks unlikely that Iran will improve on their win record, but with the likes of Alireza Jahanbakhsh and Ghoochannejhad, it looks probable that they will win the “Team-with-the-best-names” award.

Nigeria has improved by leaps and bounds over the last few years, but its tendency to capitulate is as strong as ever. Stephen Keshi has put together an impressive squad that finally took home the Africa Cup of Nations and put up a decent fight at the Confederations Cup.

Led by talents such as the likes of Victor Moses, Emmanuel Emenike and John Obi Mikel, this team looks pretty strong.