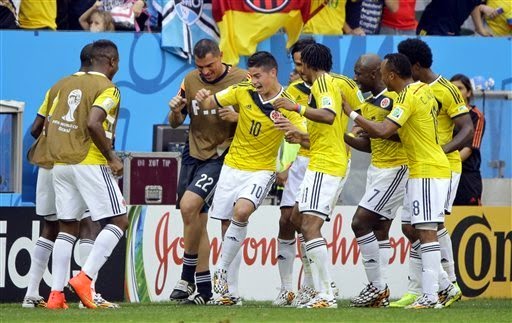 Brazil happily over Chile in the quarterfinals of the World Cup, Colombia with two goals by James Rodriguez secured passage further

Only a few inches separated the national team of Chile from the great surprises and ejecting host from World Cup already in the knockout rounds, but in the end the Brazilians still passed away due to penalty shootouts.

Brazil is better opened the game and after pressing reached the goal after a corner kick over David Luiz in the 18th minute. Chile equalized 14 minutes later through Alexis Sanchez, after a poorly executed outs by Marcelo and the Hulk, and retrieved ball by Vargas.

Chile is in the first part of the second half was the better team, even though the Brazilians first shook net after 55 minutes, but referee Webb did not admitted goal, because the Hulk during receiving the ball played with his hand.

In the 64th minute, after an great attack Chileans, Aranguiz shot and Cesar with great reactions save the net. From a similar position later for Brazil shot Hulk, but this time defending Bravo.

In extra time we have seen a lot of things, but the match was almost resolved in the last minute of the second overtime, when Pinilla from just outside the penalty next helpless Cesar hit the bar.

During penalties Julio Cesar has defended shots Pinilla and Sanchez, while Jara as the last performer hit the post, while Bravo defended shot from Hulk and Willian missed the goal, but Luiz, Marcelo and Neymar were precise and introduced their team to the quarterfinals.

With two goals brilliant James Rodriguez Colombia national team deserved to win Uruguay and was secured place in the quarterfinals of the World Cup in Brazil, where they are waiting for a duel against the host of competition.

After 28 minutes, Rodriguez received the ball with his chest on 25 meters with his back to goal, turned and shoot a volley but the shot hit the crossbar refused in the net. It was the best goal so far in the championship and crown better games of Colombia in the earlier part of the match.

Already at the beginning of the second half Cuadrado lowered a hooked ball from the left side to the top of the box where is James Rodriguez again the fastest to skilful to scored for 2-0.

Colombians have shown that they are after the first round rightly considers one of the favorites of the championship, and that will be a difficult opponent to Brazil in the quarter-finals, while in Uruguay see how their play still too dependent on one player, Luis Suarez whom has not been on the field.