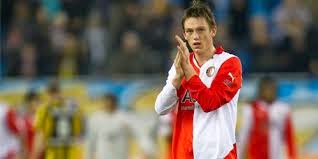 De Vrij may currently be in Portugal training with the Netherlands national team in preparation for the World Cup, but according to reports in Italy, talks over a transfer are intensifying in Rotterdam.

Today the Roman newspaper Il Tempo reported that Lazio and Feyenoord are nearing an agreement, and the deal could be announced at any time. Lazio have reportedly offered €6 million for the 22-year-old, but Feyenoord are holding out for an extra €1 million.

Manchester United and Liverpool entering the race for the centre back has seemingly accelerated the rate that Lazio want to complete the deal, which they want wrapped up before the World Cup.

The newspaper also states that Lazio are interested in De Vrij’s team mate Bruno Martins Indi, but any move is not yet concrete.

Lazio finished a disappointing ninth in Serie A this season, and are planning a shake up to their squad this summer, with De Vrij the first name they hope will come through the door.