Simeone: It is impossible to describe this feeling

Simeone: It is impossible to describe this feeling 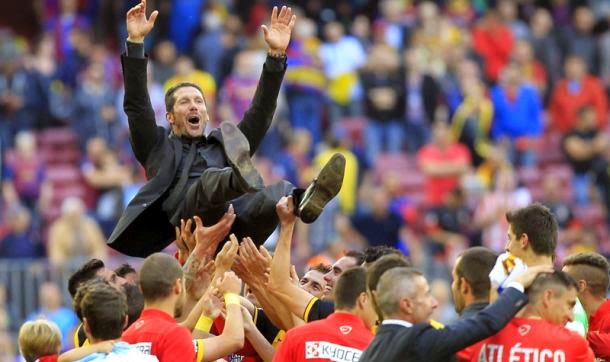 Atlético Madrid manager Diego Simeone praised the huge effort his players made as a team, not only to earn a draw at Barcelona, but throughout the season, as his team emerged triumphant in their quest to win La Liga

“This is massive, a huge joy that I can’t put into words. I have to thank all the players and the people who believed in us, like Miguel Ángel Gil, Enrique Cerezo and of course, Luis Aragoñes… who I’m sure was there in spirit defending with us.”

Simeone also underlined the keys to their triumph in La Liga this season.

“Hard work. That’s something that’s never been negotiable, we’ve always underlined that it’s something we’d never compromise about. They did that themselves and today is one of the most important days in the history of Atlético. Ending up as champions here in Barcelona is a huge joy.”

Whilst in Madrid, passionate Atlético Madrid fans are already congregating and celebrating their La Liga title at the the Neptuno fountain, Simeone and his team can’t wait to get back there and join the celebrations.

“We’re really looking forward to seeing everyone and to see Madrid covered in red and white.”

True to his ‘one game at a time’ philosophy, whilst Simeone recognised that everyone will want to celebrate winning La Liga, he remains conscious that there’s one more final to be played, in the Champions League and against Real Madrid.