Anderlecht won a championship of Belgium

Anderlecht won a championship of Belgium 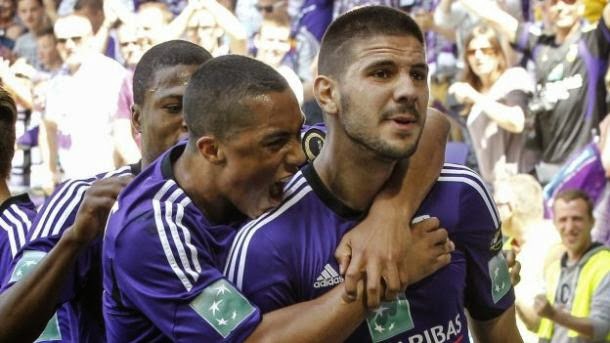 The players of Anderlecht won the Belgian championship 33rd time after the 10th round of the "League for Champions" that country overcome Lokeren 3:1

Three teams were in the running for the title before the last rounds and all three were the hosts. Anderlecht however was in the best position, and the victory over Lokeren won the title.

Domestic players celebrated a 3-1 with by one exclusion on both sides. Mitrovic, Mbembe and Praet gave a goal for domestic Harbaoui from penalty for the visitors. Vanden received a red card in the ranks of Anderlecht and Persoons on the other side.

Anderlecht finished in first place with 51 points, and this is his 33rd league title. In qualifying for the Champions League goes Standard, which was won with 1-0 Genk with goal Carcela-Gonzalez.

Gudjohnsen and Castillo brought triumph Club Brugge over Waregemom (2-0) and Club Brugge wil in the European league.
at 8:21 AM
Email ThisBlogThis!Share to TwitterShare to FacebookShare to Pinterest
Labels: Anderlecht, Belgium, football news