Friendly match: Netherlands and Ecuador played a draw in Amsterdam

Friendly match: Netherlands and Ecuador played a draw in Amsterdam 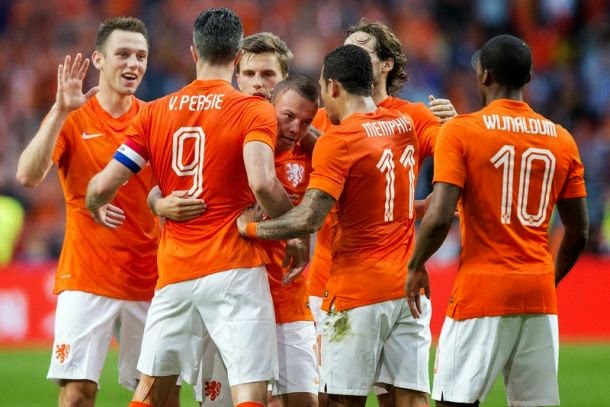 Louis van Gaal’s side started in their new 5-3-2 formation, but despite the extra defender, it was a mistake at the back that allowed Ecuador to open the scoring on nine minutes. Daryl Janmaat failed to play Jefferson Montero offside, and the midfielder latched onto a pass before slotting the ball past Jasper Cillessen.

Netherlands found the equaliser on 37 minutes, and what a goal it was, as Jordy Clasie’s fantastic ball over the top was chested down by Robin van Persie, before the striker lashed first time into the top corner. Memphis Depay, who was excellent throughout the match nearly made it 2-1 before the break, but after jinking into the box, the winger just curled over.

The second half saw the Dutch dominate, but unable to break down a determined and well organised Ecuador side. Van Persie came inches away from converting Patrick van Aanholt’s cross, while Daley Blind fired inches wide, as the game limped to an unremarkable finish.

It wasn’t a vintage performance by Netherlands, but with Arjen Robben, Nigel de Jong, Jeremain Lens, Rafael van der Vaart, and Wesley Sneijder still to join the squad, judgement should be held on Van Gaals formation. There was a number of positives that can be taken from the performance, but improvement will be needed before the opening World Cup game against Spain.

Daryl Janmaat was forced off the pitch in the first half due to an ankle injury, which Van Gaal will be hoping isn’t too serious, with Gregory van der Wiel already out.