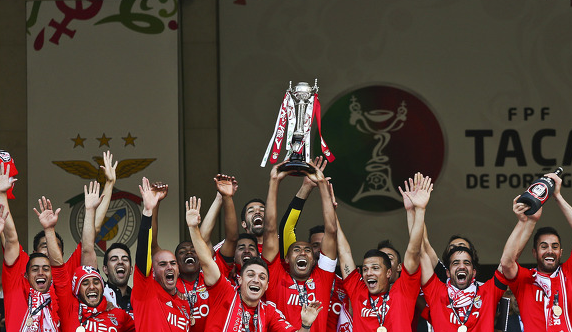 Footballers Benfica have won third trophy this season. In the final of the Portuguese Cup in Oeiras beat Rio Ave 1-0

The only goal in this match Gaitan scored after 20 minutes, and even though the end of the match there were many attempts on both sides, the result is unchanged and remains 1-0 for Benfica.

Just ten days ago Benfica was better than Rio Ave in the Liga Cup final, and convincingly won the Portuguese Cup, ending a three-year dominance of Porto. The only final in which Benfica this season is not celebrated is in the European league in which he was better Sevilla.

at 12:36 AM
Email ThisBlogThis!Share to TwitterShare to FacebookShare to Pinterest
Labels: Benfica, Portugal, Portuguese Cup