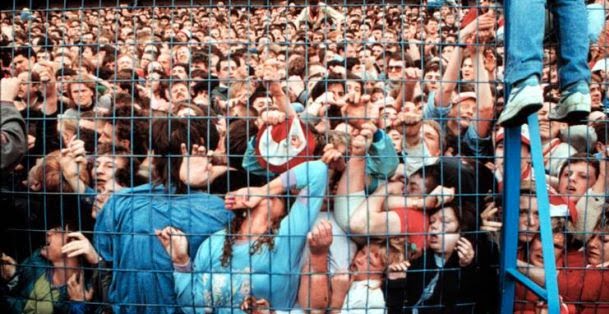 As it was the last drop that spilled the cup, because after that, nothing was the same at the stadiums in the UK, especially England. These Saturday 15 April 1989th year everything changed


According to an old rule in England, the FA Cup semi-final matches were played on neutral ground, so they are two great teams, Livepool and Nottingham Forest met at Hillsborough Stadium in Sheffield. On the one hand Grobbelaar, Nicol, Dalglish, Rush, Barnses. On the other Steve Sutton, Stuart Pearce, Nigel Clough. Saturday and beautiful weather greeted the players, of course, it was known that the stadium will be full.

Due to the tragedy that occurred four years earlier at Haysel, police were far more rigorous towards Liverpool fans. So in front Leppings Lane, which was designed for the fans of Liverpool, after 14 hours started to create a growing crowd. Even then, the police in terms of organization, losing the strings, the head of police security David Duckenfield ordered to open the gate at the entrance C and a big crowd of fans headed for the part of the stands. There was of extremely crowded stampede in which people were simply trampled on each other, while the police had orders to stop the entry of the fans into the terrain.

Fans were nailed to each other so close that many died standing up. Unfortunately, a large number of children killed since the boys and girls were closest to the fence. The youngest was ten years old and his name is Jon-Paul Gilhooley. All this happened only some 6-7 minutes before the game, while the players were at warming. Some were already dead, some suffocated, some were trying to get away, still others to assist injured. Only a few meters behind players.

The match began, but was stopped after just six minutes. Already then it was clear that at Hillsborough stadium grandstand great tragedy happened. The players of both teams are trying to help, some were desperate looking dead around them. At the same time the stadium echoed moans, groans, people are mourning their dearest asking for any help. A total of 94 spectators were killed on the day of the accident, while the injured were 766, and 300 of them were taken to the hospital. Four days later, the number of dead rose to 95 when fourteen Lee Nicol died in hospital from injuries.

March 1993rd Tony Bland died after nearly four years in a coma. The number of victims climbed at 96 The names of victims in the accident can be found next to the Shankly gates at Anfield. Among them was a cousin of the legendary Liverpool's captain Steven Gerrard.

Unfortunately, a long time it was said and written about how the Liverpool fans were guilty for the tragedy, but the fact is that to this day have not been reconciled survivors and relatives of victims. Still 2012th year, an independent commission issued a report in which have worked numerous experts. It turned out that of the 96 deaths, respectively Liverpool fans, at least 41 of them could be saved if the police responded at a valid way. Moreover, it was confirmed that the police all the blame for the tragedy laid on the fans, which did not correspond to the truth.