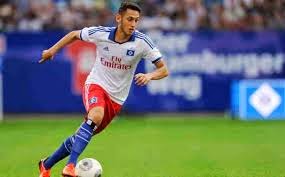 The 20-year-old midfielder is seen as being a potential long term replacement for Frank Lampard.

Calhanoglu also recently said: "My goal is to play at Hamburg and eventually join a club in England or Spain in the future."

Atletico Madrid have also been closely linked with the Turkish international.

The Mannheim born youngster was snapped up by Karlsruher aged just 15 and rose through the youth ranks before being promoted to the senior side towards the end of the 2011-12 team.

Calhanoglu made ​​a series of impressive performances but was unable to prevent KSC dropping into the 3rd Liga.

Calhanoglu remained at KSC for another season as HSV ended up loaning him back to his former club.

The Turkish international shone at KSC, scoring 17 times and providing 12 assists in 36 appearances - the best performing U20 player in the league. Çalhanoğlu helped guide Kalsruher to win the league title and earn promotion back into the Bundesliga II.