Goal of the Week: Wayne Rooney VS Orlando Engelaar

Goal of the Week: Wayne Rooney VS Orlando Engelaar 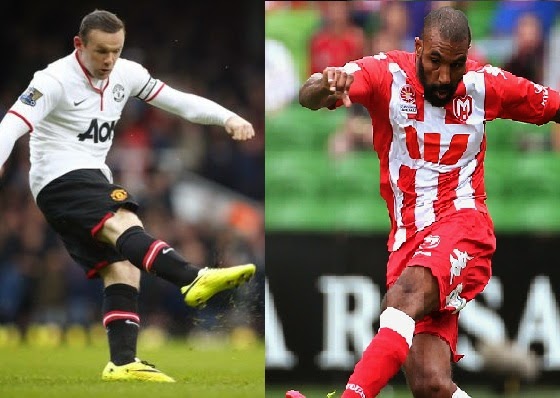 This weekend on football fields across Europe achieved many beautiful goals, and most are talking about the goal that was scored by Wayne Rooney. Orlando Engelaar ensured that the competition for the best goal be uncertain


Manchester United after the victory against Olympiakos in the Champions League and the passage to the quarter, this weekend beat and West Ham 2-0 as guests. But more was said about the first goal which was scored by Wayne Rooney (he was the scorer and second goal) than about good game and victory.

It was played the seventh minute when Rooney brought the Red devils into the lead of 1:0. He sored almost from half of the field for the advantage of his team in this match. The home team's goalkeeper Adrian is just with a look show out the ball into the net.

Even David Beckham, who was present at the game in an interesting way celebrate this goal.


But a former member of Twente, Schalke and PSV Eindhoven and former representative of the Netherlands, now a player of the Melbourne Heart, member of the Australian A-League, Orlando Engelaar sure that the media proclaimed his goal as the best this week.

Thus, the English media like www.metro.co.uk raved about the A-League goal.

“Everyone has been busy debating how Wayne Rooney’s sublime strike against West Ham yesterday compares to David Beckham’s classic against Wimbledon all those years ago,” the Metro wrote.

“But this one from Australian A-League player and former Holland international Orlando Engelaar could actually top them both."

Engelaar’s strike is beautifully weighted, prompting the justifiably excited commentator to yell in his Aussie drawl – ‘Eat your heart out, Waayne Roooonaaay!’

Goal of the week?