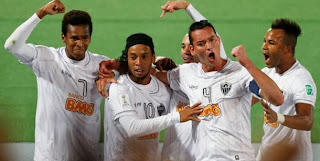 Although the match ended with a player less, the Brazilians to score a valuable victory came in injury time, while the remaining four goals in the match scored in the first half.

Complete results turnaround came in the 15th minute when were awarded a penalty for Guangzhou, which is into the lead converted Conca. The Chinese have kept the advantage until stoppage time in the first half, when things at start with a beautiful free kick returned Ronaldinho .


Legendary Brazilian in the 87th minute got a direct red card for kicking a player without the ball, but it did not adversely affect the Brazilian club to a victorious goal in the coming 91st minute by goal Luan.