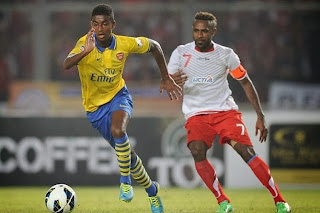 Gedion Zelalem was born in January 1997th year, four months after the current Arsenal coach Arsene Wenger arrived at the club, and when the popular professor took the first double crown, Zelalem had one year, and only six when the Gunners were imported season without defeat

Wenger is a man who that for two years celebrates 20 seasons on the bench for Arsenal, and one of the prime news in the British press is the possibility that in the third round of the FA Cup in a match against Tottenham plays 17-year-old Gedion Zelalem, a German, originally from Ethiopia.

The news itself is not so strange, because Wenger earlier in cup matches giving teenagers a chance, but never so far that has not happened that for the first team plays a guy who was born after Wenger took over the Gunners.

So now it is time that the club re-cycles the first generation born after Wenger's arrival, as could say, the time has come to debuted his rights, "kids", the first of which will be Gedion Zelalem.


Arsenal beside Zelalem in the ranks has another future star, and it is Yaya Sanogo.