Sneijder: We do not fear of Chelsea, we know how we need to play against them

Sneijder: We do not fear of Chelsea, we know how we need to play against them 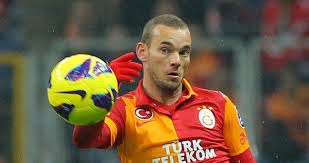 Wesley Sneijder, the Dutch 29-year-old Galatasaray midfielder, will meet in the knockout rounds of the Champions League with his former coach at Inter, and today Chelsea manager Jose Mourinho

Galatasaray and Chelsea will play the first match round of sixteen on the 26th February in Istanbul, a rematch 18th March in London.

Wesley Sneijder and Jose Mourinho were together at Inter won the Champions League 2010th year, and on this occasion will be on opposite sides in this competition.


"It's not hit me when I found opponent for the next round. All teams that arrived among the top 16 in the Champions League they deserve that ranking. They are all good clubs. Against Chelsea will be hard for us, but we believe that we can throw out them and qualify it to the quarterfinals. For this, we will work extremely hard. We know what to do in order to beat Chelsea and we are not afraid of them," said Sneijder.