Champions league: Clash of giants at Old Trafford belonged to guests from Madrid

Clash of giants at Old Trafford belonged to guests from Madrid 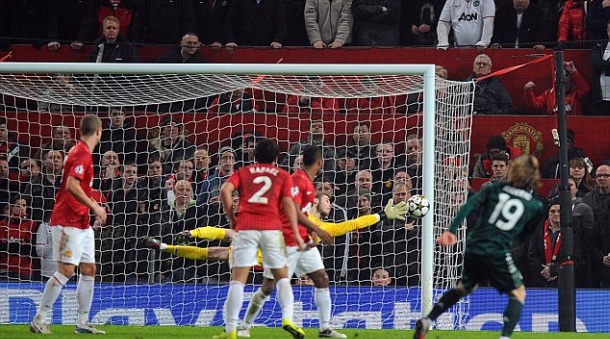 Clash of the Titans at Old Trafford belonged to the Real Madrid, who managed to beat Manchester United with 2:1 and with a total 3:2 pass to the quarterfinals of the Champions League.


Beginning of the game belonged to the Real Madrid, which was somewhat dominant, holding the ball more in the legs, and finally first threatened after the ten minutes of the game, but Higuain shot from fifteen meters was no danger to score De Gea.

The last 20-minute of the first part was marked by Sir Alex Ferguson. In 21th minute the best chance for United. Giggs has performed a corner, Vidic jumped brilliantly, shot by head, but a tripod was leaguer Madrid team . Further action ball from the goal post rejected to Welbeck, who was better said hit the ball, but ended up in the hands of Lopez, although the Englishman has been in offside position.

Four minutes later, Van Persie leaves the ball for Welbeck, who ran towards the goal of Real Madrid, but Ramos and timely dive blocked his shot. Was blocked in the 28th minute, Ronaldo on the other side after a great pass from Khedira.

Careless United defense was able to bring Real Madrid the lead in the 32nd minute when the Higuain got the ball and shot almost at the end of a dead corner, but De Gea defends. Lopez at the 33rd minute rescues guests. First he defended one fierce blow from Van Persie, Welbeck runs straight to rebounded ball but Lopez again defended.

Host more luck than skill comes to leadership at the opening of the second part. Nani got one duel with Varane on the left side, throw in the middle of Real's penalty area, Ramos ahead of Welbeck sent the ball into his own net.

In the 56th minute an important detail for the game is played. Turkish referee Cakir bit too strictly excluded Nani, who was fighting for the ball with Arbeloa. leg lifted to high which cost the Portuguese red card, Mourinho immediately into play instead Arbeloa entered Modric, and that's Croatian midfielder brought equalizer.

Modric at 66 minute scored a fantastic goal shot from about 26 yards. Hit the right post, and the ball at the end of refused to into the net De Gea. Just two minutes later, a complete reversal . Higuain and Oezil collaborated, Argentinian has sharply threw, and Ronaldo scored against former club, but of course did not celebrate a goal.

With less player was almost impossible to expect United to achieve two goals, does not receive none, and pass on. Lopez saved the Kings, and we all withheld dramatic finale great defenses. First defended Carrick header after a corner kick that was performed by Young, then stopped and Van Persie, while Rooney shot over the crossbar in the action below.

In the final Kaka almost solved all dilemma about passing to the quarterfinals, shot well from the left side, and De Gea using tripods come to the ball. De Gea defended by the end of two attempts from Ronaldo Lopez miraculously escaped his goal after Vidic's head shot after a cross from Van Persie corner. Guests are able to preserve their advantage and qualify for the quarterfinals, and now certainly one of the main favorites for the new title of European Champion.
at 2:25 PM
Email ThisBlogThis!Share to TwitterShare to FacebookShare to Pinterest
Labels: Champions League