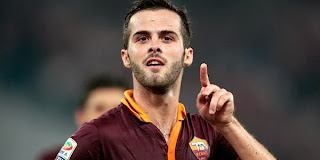 PSG will attempt to bring midfielder from Roma, if Argentinian goes on "Old Traford", according to French media

'L'Equipe' has come to information that the Paris Saint-Germain in the Miralem Pjanic found a replacement for Javier Pastore, if he continues his career at Manchester United.

Moyes is the creative middle much needed, and Pastore is mentioned as one of the options.


Argentinean 2011th was arrived at "Park Princes" from Palermo, on arrival had a very major role in the team that lost the arrival of Ibrahimovic.

Speculated that Pastore unhappy with status because of alleged conflict with the Swedish striker.

Pastor at Blanc is not a standard first team player, has him in rotation, and he wants to play more to his name was on the list of passengers of the Argentine national team for the World Cup in Brazil.


In case that left without Pastore, 'Saints' will try to fill a gap by bringing Pjanic from Roma.