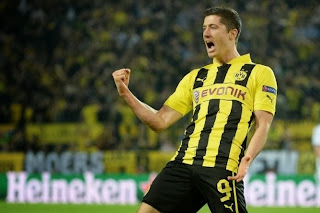 It is known that last year the best player of Borussia Dortmund Mario Gotze joined the ranks biggest rivals Bayern Munich. This season the trend continues, only this time it also makes Robert Lewandovski.

Robert Levandovski will be a free player next summer, from today can negotiate with other football clubs.

There is no dilemma, he had already chosen Bayern, even though he had offers all the leading clubs in Europe.

Bavarian media report that Lewandovski perform medical examination until the end of this week, and thus put an end to speculation. From 1st July 2014th Polish internationals will play for Bayern Munich.


Thus the failed hopes of Spanish and English clubs to be able to seize Dortmund attacker, or make him change opinion.