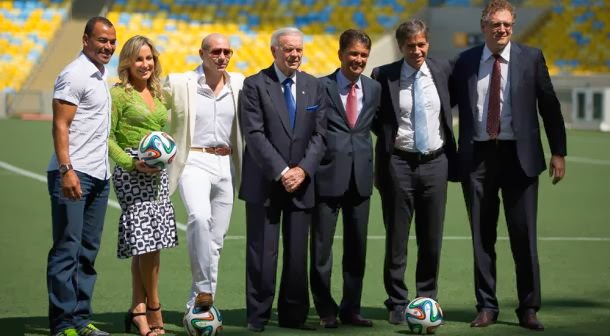 The official anthem of the World Cup in football will perform the famous American singer Jennifer Lopez, rapper Pitbull and Brazilian Clauida Leitte

FIFA has revealed that the song will be called "We Are One (Ole Ola)", but it is not known when the anthem of the World Cup will be published.

The lyrics written by Pitbull, and the same will announce, ignite excitement in the feelings of fans.

The three musicians were presented on Thursday at the famous Maracana Stadium in Brazil on which will be 13th July to play the final match of the World Cup. The song is titled "We Are One (Ole Ola)", and the goal is to repeat the success of the hit "Waka Waka", which was performed by Shakira, was the official song of the World Cup in South Africa four years ago.

at 4:33 AM
Email ThisBlogThis!Share to TwitterShare to FacebookShare to Pinterest
Labels: World Cup, World Cup anthem, World Cup in Brazil