Bravo for Brazilians - Stadium opened but not completed?

Bravo for Brazilians - Stadium opened but not completed? 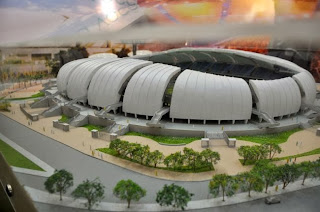 One of the six stadiums on which will be played matches the World Cup in Brazil, which were supposed to be finished by the end of the 2013th year, is open in New Year's night, but will be fully completed until the end of January

The organizers of the World Championship in the city Natal, turn on the lights in the Arena das Dunas and open it, but were told that the works will last until 20 January.

Brazil began the year without a completed six of the 12 stadiums on which will be played matches at the World Cup during the summer, although the International football federation (FIFA) decreed that all stadiums to be completed by the end of the 2013th year.

The president of FIFA Sep Blater in December said that the organization until February extended the deadline for the construction of the stadiums.

Completion of stadiums delayed due to financial difficulties, questions about the safety of workers and accidents on construction sites.