New slap to champion on the "Theatre of Dreams"

New slap to champion on the "Theatre of Dreams" 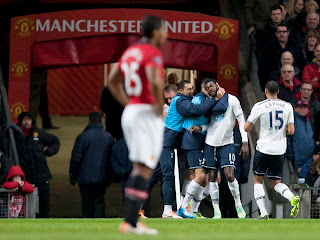 The series from four consecutive triumphs Manchseter United stopped by defeat from Tottenham on "Old Traford". Interestingly, this is the third defeat in the last four match "​​devils" at home

The last match on the 20th rounds of Premier League was played on the "Old Traford" where Tottenham manages to take the three points, having won 2-1.

'The Devils' and 'Spurs' are entered into the match with the same number of points, the host had a slight favorite role, however, failed to justify it. Tottenham second season in a row carries the entire prey from 'Theatre of Dreams'.


Manchester United had more possession in the legs at the start, but there was a serious chance in front bare , guests were seriously threatened through Lennon.

Lack of imagination in the game Moyes team grew more and more emphasized as time went by, Tottenham are organized defended acquire the security and the benefits it arrived in the 34th minute. Christian Eriksen was centered towards Emmanuel Adebajor, whom was Smoling totally forgot, and this header sent the ball into a small net - 0:1.

Up to half there was no change, United was below again tried without any real chances.

In 66th minute was scheduled new shock to local fans, Christian Eriksen not fare well in a crowd in front De Gea's goal and brought the London team double advantage - 0:2.


However, the answer was expressly came after only one minute. Januzaj has launched Danny Welbeck in front of Loris, masterful realization of dark-skinned attacker that demonstrates this move, that is in good shape - 1:2.

Shortly after tried Adnan Januzaj from about 20 meters, but the ball was sent near post.

In the 70th minute, bad luck for Tottenham, injured a brilliant Emanuel Adebajor, must outside the game, changing him Chadli, indicating a clear intention that defending the goal to the end is priority.


Although the hosts went for all or nothing, they didn't managed to avoid defeat in their stadium - the third in the last four matches.
at 12:00 PM
Email ThisBlogThis!Share to TwitterShare to FacebookShare to Pinterest
Labels: David Moyes, English Premier League, football news, Manchester United, Premiere League, Tottenham, Tottenham coach