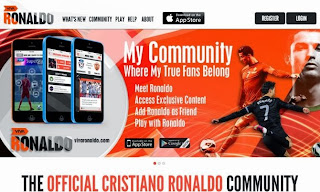 
Portuguese footballer Cristiano Ronaldo has launched its own social network called "Viva Ronaldo", on which can connect with his fans, who have the ability to communicate and find out the latest news about their idol. Real Madrid striker has promised fans that will regularly be present on his network and active whenever he could.

Membership to the site is free, and there is an application for mobile phones. Fans can through the network to watch live matches Ronaldo, they have a chance to compete and win a T-shirt of one of the best world football players autographed, but also a ticket to some of the games in which he plays. Also, they can and hung their photos and send messages to the Portuguese ace.


Ronaldo will be presented on Sunday at his inauguration in its own museum, which was opened in his hometown Funćal, on the island of Madeira.

at 1:50 AM
Email ThisBlogThis!Share to TwitterShare to FacebookShare to Pinterest
Labels: Cristiano Ronaldo, Interesting, social network of Ronaldo, Viva Ronaldo