Henry: I dream about once again returning to Arsenal

Henry: I dream about once again returning to Arsenal 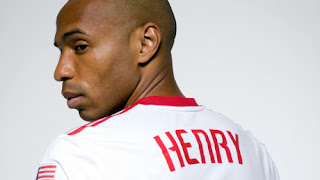 French 36-year-old footballer Thierry Henry is one of the main trademarks of London's Arsenal throughout the history of this football club
Still active Frenchman, who plays for New York Red Bulls, is in his career wearing a jersey of the London football club from 1999th to 2007th year (later is even half a season spent on loan). In total, with Gunners won the Premier league twice, and three times the FA Cup.

"For me, the dream was to return to Arsenal one day. I really dream about it," said Henry, and he continued to talk to Sky Sports:

"This coming year is my last years. Thus says the contract, but not saying that I will also then and quit with active playing football. And, what I will do after that really do not know. Wish I could be quite close to football. And if possible, that do what I do at Arsenal. "

If he was referring at the Arsenal place of the coach a French footballer replied:

"I've got to do some things and before that possible job right? From the current point of view is really hard to say whether I will do that work. Even was hard to me to tell whether it liked it or not," finished, Henry.