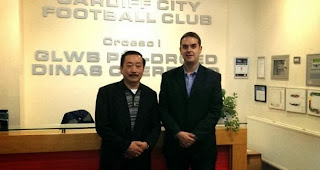 Soon it is expected the successful realization of the project the new Statute of FC Sarajevo, as well as the formation of a new Board of Directors of the football club from Kosevo in which will Tan will have full control.

Many believe that this is a historic day for FC Sarajevo, which will mean exit from the gloomy situation in which are most football clubs in Bosnia and Herzegovina and the step that will lead this team first to the title , and then to a wider role for the European scene.

Members of the Board and current director of the football club Dino Selimovic did the lion's share of the work and fulfill all the conditions that Vincent Tan on them set up. A few days ago was completed and the last one control that has established that all required and completed.

Malaysian billionaire will pay the agreed funds and will soon establish a budget for this and next season.

New Board of Directors through a combination of personnel from Sarajevo, England and Malaysia.

Arrival Tan in FC Sarajevo passes Tan in the busy activities of all team officials who are working on the recovery team. FC Sarajevo after a long time to have unblocked accounts, debts recovered several years old and completely stable financial situation.

It is important to emphasize that in the contract between the Board of Directors FC Sarajevo and Vincent Tan states that no one, under any circumstances will not change the name, emblem and color FC Sarajevo.
at 3:09 AM
Email ThisBlogThis!Share to TwitterShare to FacebookShare to Pinterest
Labels: Bosnian football league, Cardiff owner, enko football, FC Sarajevo, football news, Vincent Tan