Again tragedy in Brazil: killed another worker at the stadium!

Again tragedy in Brazil: Killed another worker at the stadium! 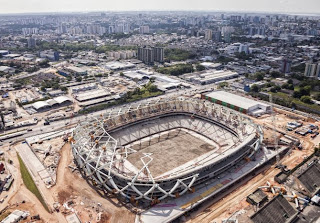 A new victim on stadium construction for World Cup in Brazil. This time a man fell from the roof of the stadium Amazonia and died after being transported to hospital


During the works on the construction the stadium in Brazil there was another accident in which is lost human life. One of the workers working on the final arrangement of the stadium Amazonia, in Manaus, fell from the roof and died, according Brazilian media.

As it was announced builder fell from almost 35 meters in height, when one of the cables broke, and died in hospital later in the day.


The stadium in Manaus, where will England play their first match at the World Cup next year, is deeply behind with the construction and working day and night in order to be completed by the deadline set by FIFA.

This is not the first tragic event with a fatal outcome, which has so far happened during the construction of the stadium, at the end of November, three workers were also died after the fall of the crane at the construction site, just as it happened in Sao Paulo.


In any case, the current preparations for the world championship in the country of football and coffee will not be remembered by the money that is spent, but by the number of lost human lives, which they paid for the construction of the stadiums.