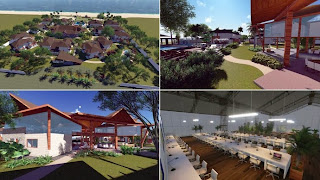 Delegation of the DFB (German Football Federation) during his visit to Brazil failed to find an adequate location and accommodation for their representative camp, and the Germans came up with the idea to build their own camp

//-->
Camp Germany, whose construction should be completed by the month of March next year makes the 14 houses in which will be placed football players and other staff national football team of this country, and the surface on which to spread the camp is about 15,000 square meters.


Although a large number of media yesterday launched an information, that will finance the construction of the camp Mercedes, as one of the main sponsors of the DFB, it is not true! The main investor of construction will be private businessman from Munich, whose identity is not yet known to the German public.

Having selected the location where they will up to the third month of the next year will be built a little elite village , it was decided that it will be at a different location, just a mile from the base and football fields on which to train the German national team.

Germany shall to the airport takes about 45 minutes, which is definitely acceptable.

In this case, the Germans will not need more than a two-hour flight to arrive at the destination in El Salvador, Fortaleza and Recife where they play their group stage matches.

Their first residents Campo Bahia should get 8th June next year, eight days before the World Cup in Brazil.