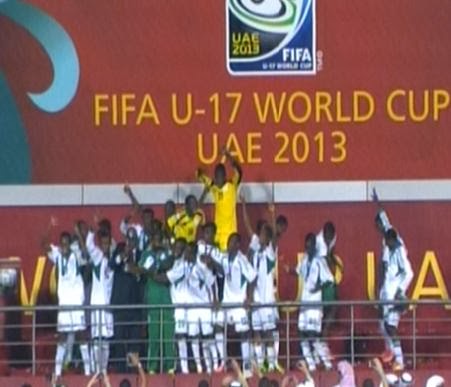 Young footballers of Nigeria by a record fourth time have won the World Cup up to 17 years after they in the World Cup final in Abu Dhabi beat defending champion Mexico with 3:0

Nigeria took the lead by own goal from Aguirrea in the ninth minute, and on 2:0 increased Iheanacho (56). Final 3-0 set Muhammed (81). Nigeria and Mexico have met during the Group Stage, and that duel ended also with conceivable victory of Nigeria (6-1).

Nigeria's national team this is the fourth world title in this age category, even though they are three times lost in the final. Mexico, however, remained on the two titles and last won two years ago at home ground.

Given that Nigeria won the African Cup of Nations, it can be said that this country returns to the path of the old glory when they 90's had a major role,how in Africa as well as globally.

In the third place match Sweden won Argentina with 4-1.

at 10:59 AM
Email ThisBlogThis!Share to TwitterShare to FacebookShare to Pinterest
Labels: Nigeria's national team, WC U17