WC U17: Nigeria overcame Sweden for the finals

WC U17: Nigeria overcame Sweden for the finals 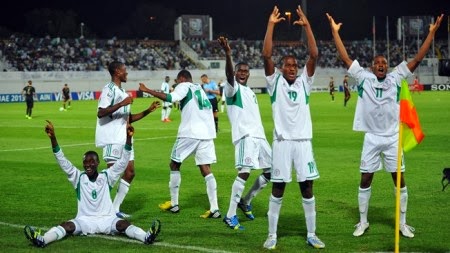 
Nigeria's victory over Sweden with 3-0 achieved ​​the grand final, which they will play against Mexico, which is in the second semi-final match overcome Argentina with the same result as Nigeria beat Sweden.

The game started quietly from both sides with slightly testing opponents. Nigeria was attacked in waves which they paid off in the 21st minute when Taiwo AWONIYI hit a goal from a fine move Africa team, which was his third goal in two matches.

We must point out that Nigeria was a much more dangerous opponent in the first half.

In the second half, similar picture, the Swedish striker Berisha just could not alone against the strong Nigerian defense, which was clear and coach Roland Larsson who brings into play strong Carlos Strandberg. Even that did not help that Sweden make a reversal. Nigeria has continued to play their game and after 80th minute when hits Samuel OKON or 81st minute and goal by Chidera Ezeh, it was clear which team will play in the final.

Finals will be played in Friday, 11.8. between Nigeria and Mexico, which will be a replay of the match group stage when Nigeria celebrated with 6:1.
at 10:53 AM
Email ThisBlogThis!Share to TwitterShare to FacebookShare to Pinterest
Labels: WC U17