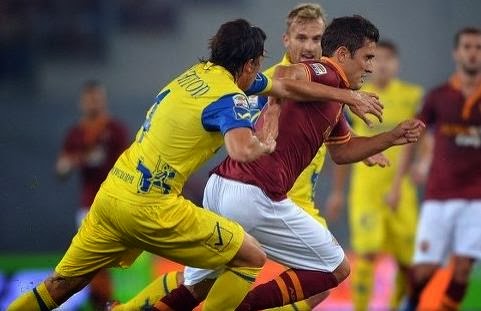 Specifically, Roma is fully effect, 10 wins in as many games, which any team so far has not succeeded.

Roma players not only have to keep on top of the table but in the current course of Serie A received only one goal, and knocked Juventus record from season 2005/2006.
BH representative in the ranks of Roma, Miralem Pjanic, had the first chance of the match. In the 3rd minutes, shot on goal guests, but he was blocked.

Footballers Roma continued their offensive and had plenty of opportunities. We note another attempt by Pjanić in the 5th minute, a shot are tried out Marquingo, Strootman, Ljajic...

However, on the break is gone with the result 0:0.

Roma in the second half continued attack, and they came to goal in the 67th minute. Scorer was Marco Borriello.

Guests are five minutes later had a chance to tie, but the defense of Roma eliminate the danger.

By the end of the match was quite tense with both sides, but the result has not changed and team of Rudi Garcia enrolled in history.
at 1:58 AM
Email ThisBlogThis!Share to TwitterShare to FacebookShare to Pinterest
Labels: Roma, Serie A