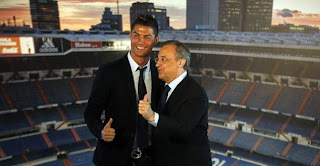 
Cristiano Ronaldo has time pen to paper on a new mega five-year deal at Real Madrid worth over 90m making him the world best-paid footballer and ensure he stays with the Spanish giants past his 30th birthday.

Ronaldo signed the deal at the Santiago Bernabeu on Sunday with club president Florentino Perez, the day after he scored in Madrid 2-2 draw with Villarreal.

Ronaldo words after signing the new contract: "Leaving Real Madrid was something I could think about, but nothing that let me lose sleep. I wanted to stay at this club, the best in the world in my opinion. If you leave Real Madrid there is not another destination, because you are already at the top. "

at 1:56 PM
Email ThisBlogThis!Share to TwitterShare to FacebookShare to Pinterest
Labels: Premiere