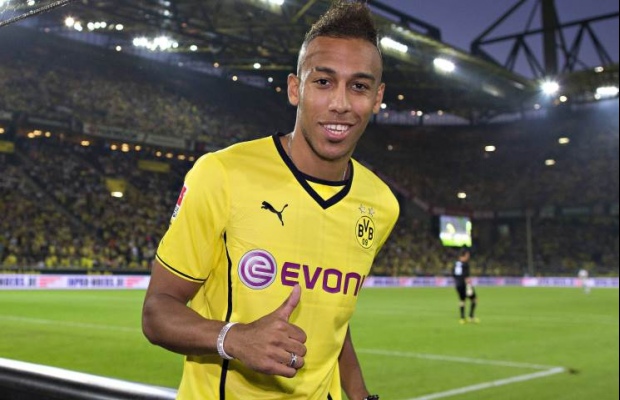 What a debut for Pierre-Emerick Aubameyang in the league! If the guy goes on like this, Mario Gotze soon no one will remember in Dortmund


This Usein Bolt as fast forward, Which Borussia Dortmund this summer paid 13 million euros Saint-Etienne, largely starting to pay off. In the first round of the Bundesliga, the day after the victory over Bayern Munich, Borussia Mönchengladbach (3:1)

Borussia is destroys Augsubrg as a guest with a hat trick Aubameyang and then hit the "silent" Robert Lewandowski for the final 0-4! Aubameyang been struck by the head and foot of race and place.

He arrived in the Alps Under the 2010/11 season from Monaco and scored two goals in 14 games, and then in the last two seasons he scored 39 goals in 82 games. For Gabon gave 11 goals in 32 appearances. Player from Gabon, the French passport, he Became the sixth in the history of the Bundesliga, Which is the debut scored a hat-trick and the first since 2008th Once this is done the player from Eintracht Frankfurt, Martin Fenin.

Otherwise, Frankfurt suffered a debacle in the capital. Hertha made ​​a spectacular comeback in the Bundesliga after a season in the second league. In Berlin, after a 2-1 score in the second part of the game filled to the brim network and Eintracht won 6:1, Which is the biggest win this team since December 2004th year (6-0, Mönchengladbach). Hanover is home had an easy job against Wolfsburg, Whose players beat themselves.

Coach Dieter Hacking will have to work on the discipline of his team, as Maximilian Arnold received a direct red card in the 32nd and Tim Klose second yellow after 52 minutes. Therefore, the defeat of 2:0 is not even bad for the "wolves".

In the next round, and all will continue to talk only about Bayern and Borussia when it comes Champion, Champion of Germany and Europe Eintracht guest, while runner-up in both senses awaits Braunschweig at home.

Then, Dortmund game against Werder Bremen at home and welcome Bayern Nurnberg. The first big derby is scheduled for November 23 in Dortmund: Borussia - Bayern.
at 3:27 AM
Email ThisBlogThis!Share to TwitterShare to FacebookShare to Pinterest
Labels: Bundesliga, Pierre-Emerick Aubameyang